The bottom line is the retailer operates too many locations and individual stores are not performing as well as they used to. H&M’s expansion over the last five years has exceeded what the market can bear. In addition, the following other factors are contributing to (RE)meter’s latest H&M tenancy rating.

Sales and profitability per store are deteriorating. (RE)meter found that H&M same store sales have declined by 18.8% since 2012 while its industry has remained relatively steady at a net increase of 2.8% during the same period. 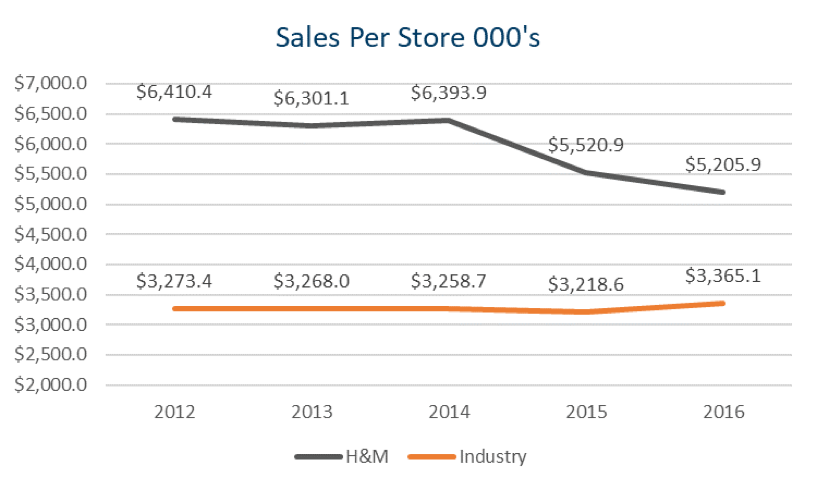 Employee productivity is declining. Meanwhile, H&M sales per employee continue to decline, from $171K in 2012 to $140K in 2016. Although still greater than the industry average of $132K, H&M’s decreased productivity may suggest market saturation or inability to adapt to market demand. 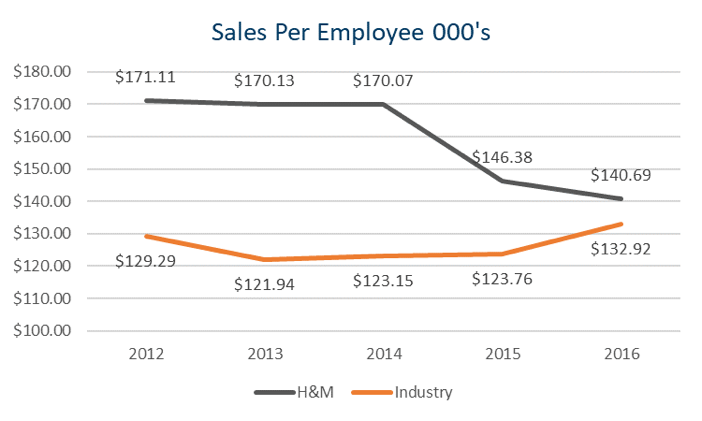 Other contributing factors to H&M’s risk rating include liquidity in the market is decreasing, leased spaces are producing less sales and profits, and less flexible supply chain diminishes slower adaptation to meet changing product demand. In other words, H&M is not keeping up with customer demand.

Scott Openlander, Co-founder of (RE)meter, explains, “Good retail tenants should be money making machines via operating profits.” The Industry (RE)port reveals H&M’s overall EBITDA and EBITDA margin have been steadily decreasing since 2013, with H&M’s per store EBITDA declining at 37.9%, all while the clothing industry has shown growth of 2.6%.

The (RE)port indicates that unless H&M turns the corner to stabilize its operating and net profits, the retailer may be find itself in another set of undesirable statistics—ones that track store closures. 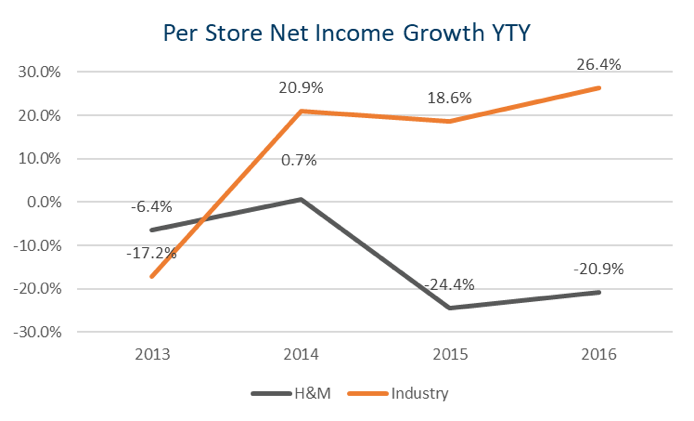 For retail landlords and property owners, Senior Financial Analyst, Xiaoxu Zhang, of (RE)meter, recommends taking steps to determine whether your tenant may be a candidate for early termination or non-renewal. He says, “First, evaluate and compare individual store sales to those of its local peer group. Then, evaluate EBITDAR-to-rent to determine if the leased space is producing sufficient operating profits to cover rent expense.”