Bankruptcy  The announcement by Toys “R” Us to file Chapter 11 bankruptcy is rumored to be strategic as a way to restructure its high debt load related to its LBO in 2005.   Toys R Us claims it does not intend to downsize or liquidate, and therefore will not be terminating commercial leases or selling stores.  If you are a landlord with Toy R Us as a tenant, BEWARE: (RE)meter feels differently and rates Toys R Us as a High Risk tenant.

Tenancy Rating  (RE)meter rated Toy R Us against 7,071 national companies competing within the Hobby, Toy, and Game industry.  When looking beyond its high debt issues there appear to be other reasons for the Chapter 11 filing.  Issues such as chronic net losses, weak operating profits and revenue declines could be other contributing factors.  Such financial issues are likely to force Toys R Us to downsize and reduce leased space.

Other Issues  Along with high debt and declining revenue, Toys R Us also has to overcome the following issues:

Declining Revenues While Toys R Us revenues have declined by 14.8% since 2012, its industry has declined significantly less at 2.1%.  “Their strategy was to expand stores in a declining industry with year over year declining revenues; that’s a poor business decision” says Xiaoxu Zhang of (RE)meter. 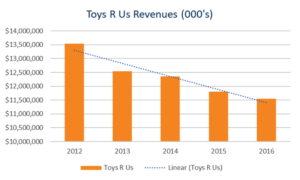 Diluted Store Sales  Toys R Us has been expanding locations during a time of declining revenues which has led to significant sales dilution on a per store basis. 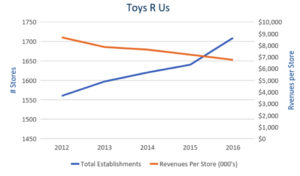 Operating Profits  Although Toys R Us operating profits have improved since 2013, they are still substantially less than the industry norm. 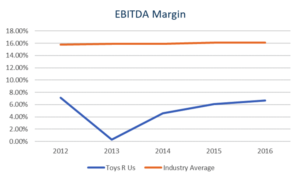 Rent Affordability Rent expense is a significant cost for retailers.  Combine rent with build-out and payroll expenses, and leased space can quickly become the most significant expense for a retail company.  A key understanding of tenant health is understanding the total capital needed to cover expenses for leased space.  Thus, it is important to take a look at operating profits.

For Toys R Us, the weak operating profits generated from brick and mortar stores (ie. leased space) create a very poor EBITDA to Rent ratio, translating to difficulty affording rent.  To be competitive with industry peers, Toys R Us would have to improve its operating profit by more than 86%!   Unless operating profits improve, there will be pressure to close the poorest performing stores to return to profitability.

Watch out, landlords!  (RE)Meter is predicting some major store closing announcements from Toys R Us in the coming months/ years.

Is Your Location Closing!? To determine if your Toys R Us lease may be a candidate for rejection during this reorganization period, Scott Openlander of (RE)meter says,  “First, evaluate store sales and compare to its local peer group.  Then, evaluate rent to sales to determine if the leased space is producing sufficient revenues to cover rent expense.”

(RE)meter can provide data and ratios for this analysis.

About Us (RE)meter is a technology venture disrupting the underwriting process in Commercial Real Estate.